It was looking like rain, so I drove down to Marsh Landing for Breakfast, figuring I'd take pictures at the park from my car if the weather didn't clear. It was still a little threatening after breakfast, but I took a walk with camera in hand anyway. I walked down Broadway, and heard lots of stuff (Carolina Wrens, Cardinals, Blue Jays, etc) but didn't actually see anything. Here's the rest of the story in pictures.... 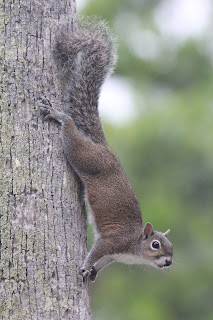 With the weather looking so threatening, I thought I might be reduced to using a squirrel. This picture did make me laugh though, I just started singing, "Na-na, na-na, na-na, na-na BAT SQUIRREL" But maybe my coffee just hasn't take effect yet. 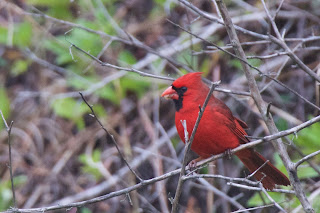 I've been trying to get a good Cardinal picture. This didn't come out as nice as I wanted, he wasn't really in the mood to pose for me.

I decided to head over to the park to see if the Starlings were still there as they should be an easy shot... 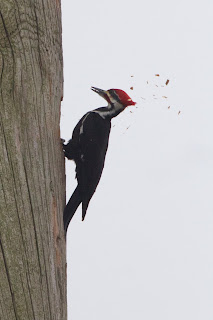 ...but before I could get to the Starlings, this Pileated Woodpecker jumped out and just begged to have his picture taken.  This is an action shot, you can see the debris that he is cleaning from the hole. After the outside is excavated, they drill the inside, then gather up and toss out the wood chips. 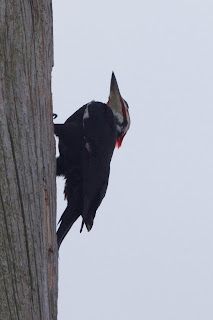 Again, maybe just not enough coffee,  but this picture made me laugh. Hard to tell that it's even the Pileated from this angle. 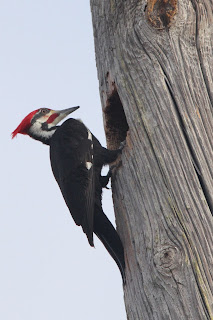 The lighting started to get a little better. Go to my 8 a.m. blog to see the picture that I finally settled on. He was an awesome little poser, and I suspect he will stay at the park as he looks like he is making a home for him and the Mrs. there.
Posted by deederange at 6:40 AM