Had a nice outing to the Brevard Zoo today. We go rained out, but here are the pictures from the first 2/3 of the zoo. We will have to go back to see the Africa part. Funny thing is, I participated in the community build for the giraffe enclosure when I lived in Rockledge, but I haven't seen it since they opened it.  Some day. For now, here's what we saw today: 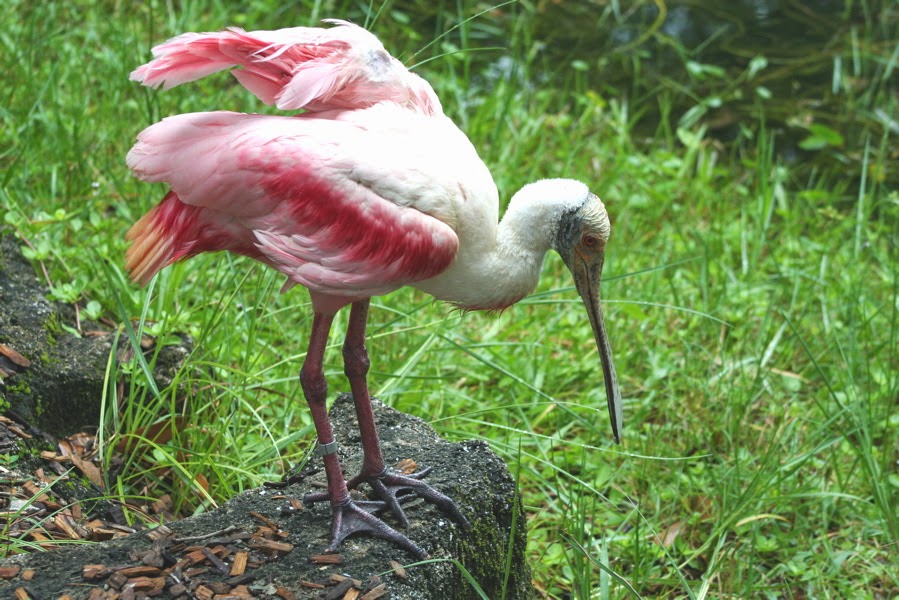 They had a captive flock of Roseate Spoonbills. Made me kind of sad that there are people who will only ever see these in captivity. 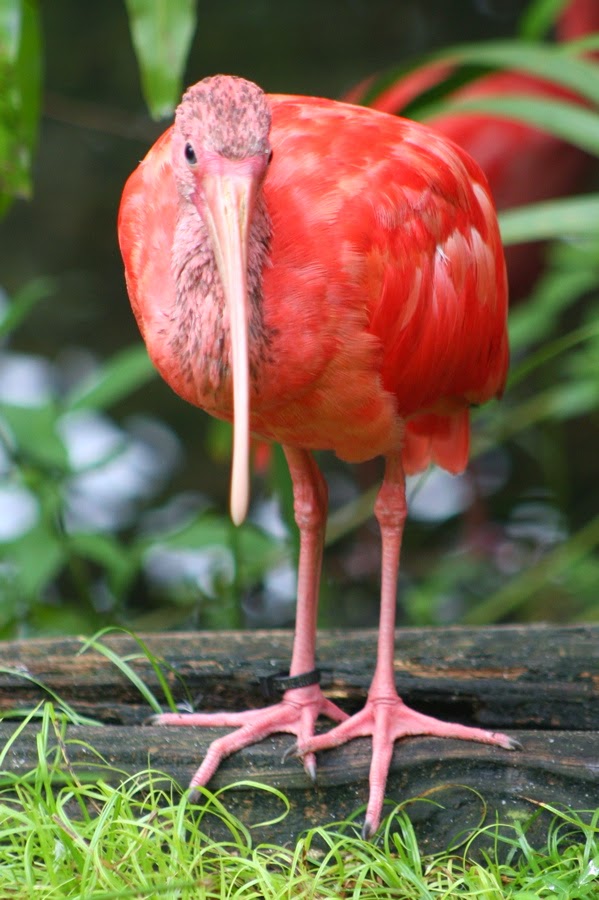 Scarlet Ibis. One of my favorite birds. I hope to see one in the wild some day. 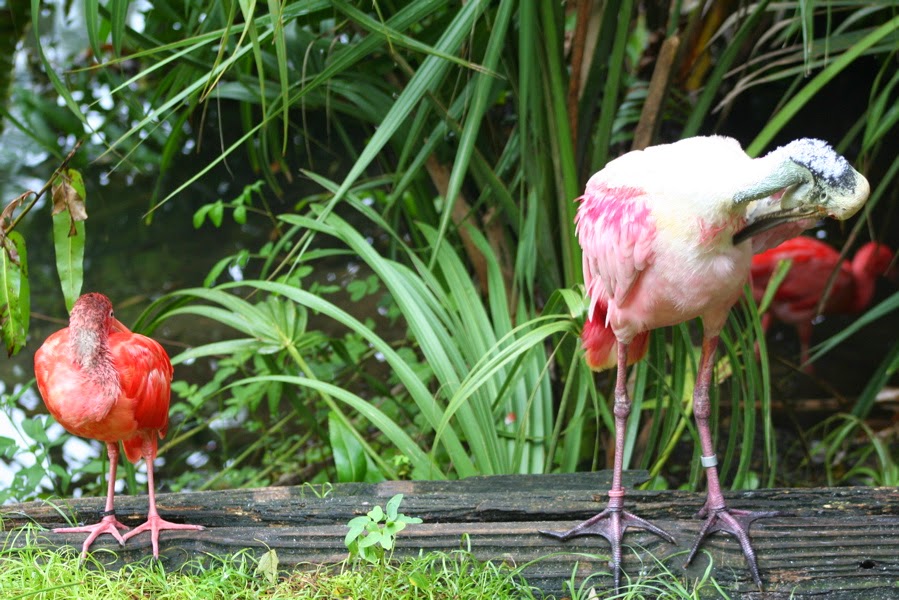 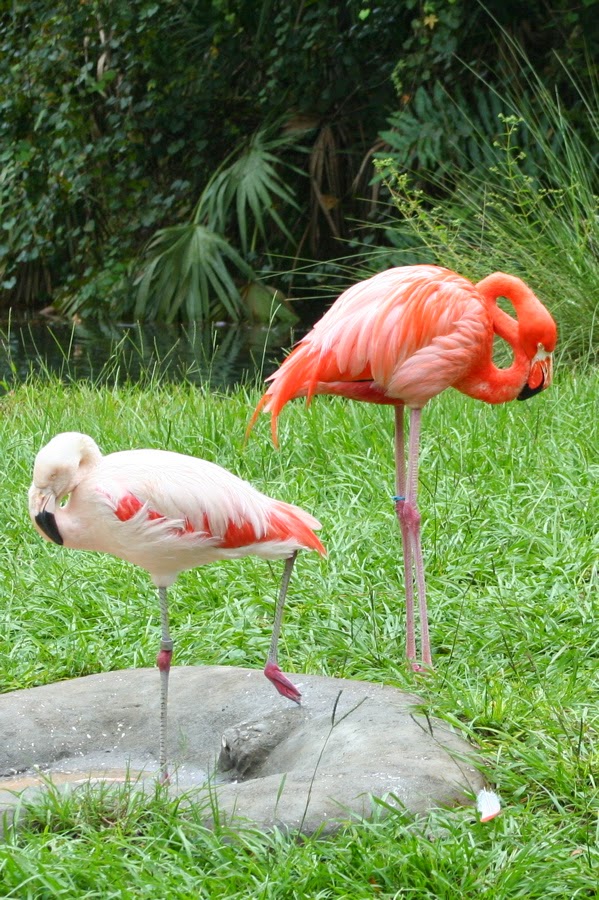 (Left to right) A Chilean and an American Flamingo. Compare and contrast. 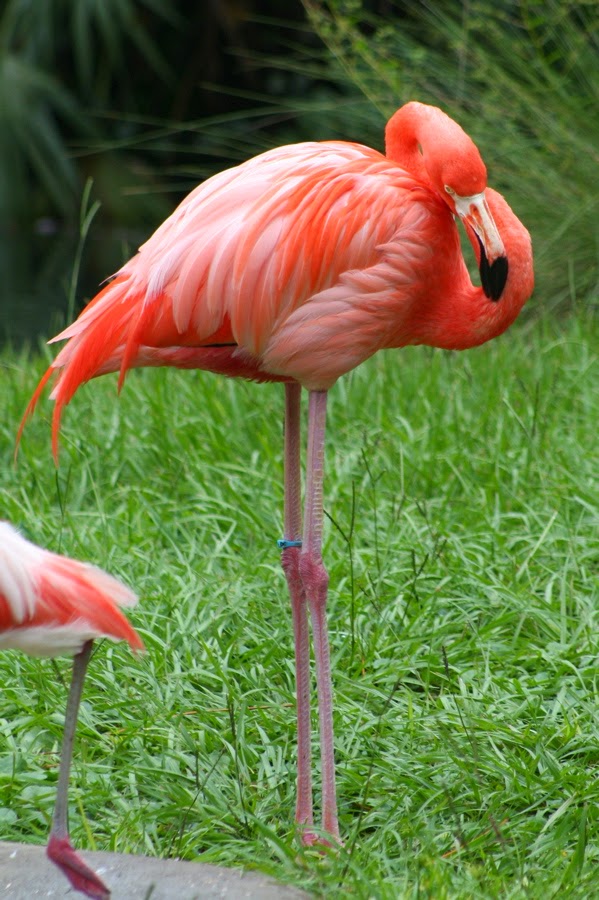 Close up of the American Flamingo. Still hoping to see one these in the wild someday. Need to do this soon before they are gone. 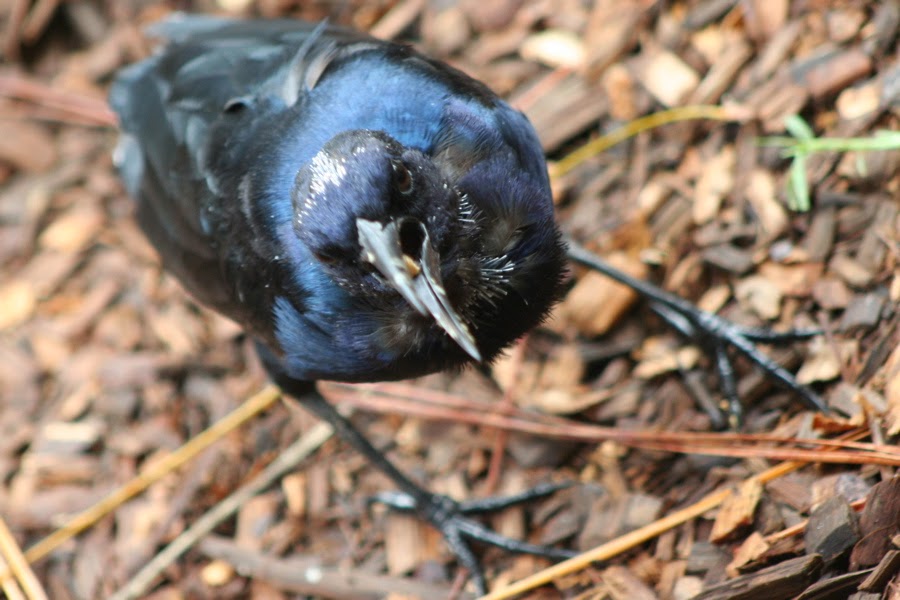 A local wild Grackle who is molting. The white parts are his pin feathers. 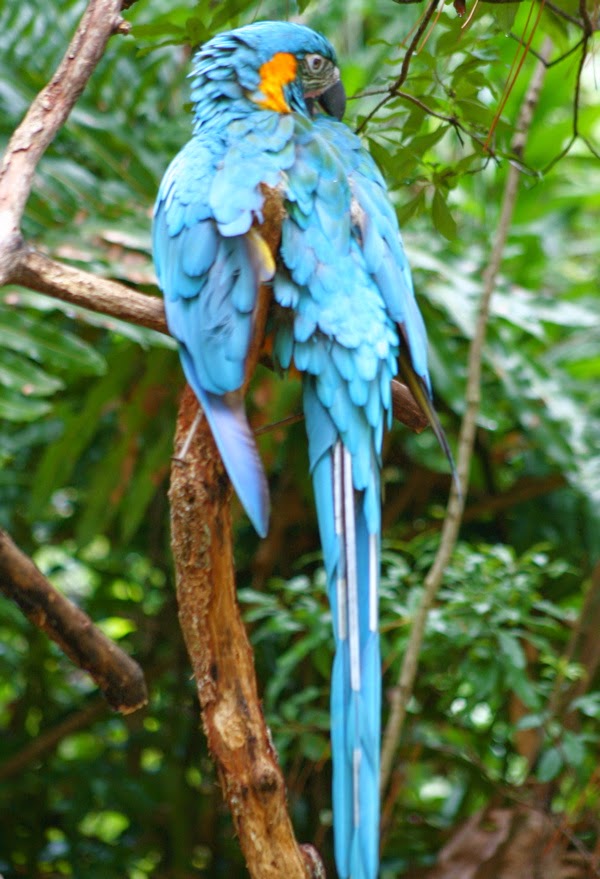 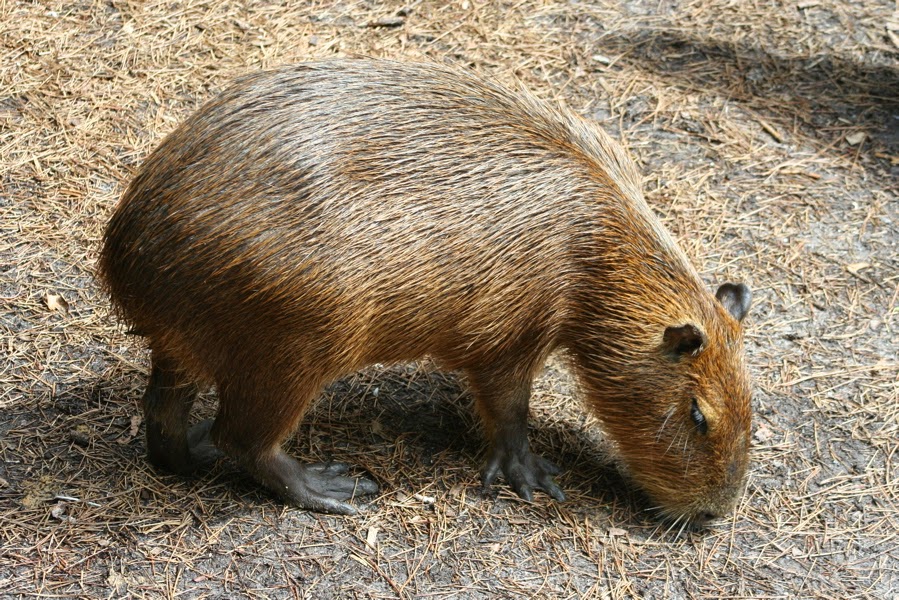 Capybara (thanks Mary for reminding me the name!) 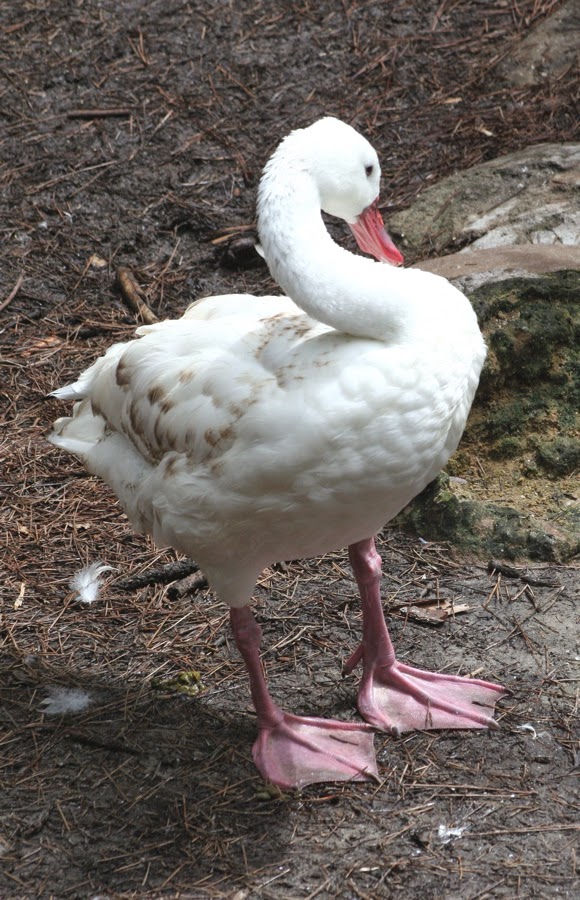 This must be where my coffee high wore off, I don't remember this guy's name either. 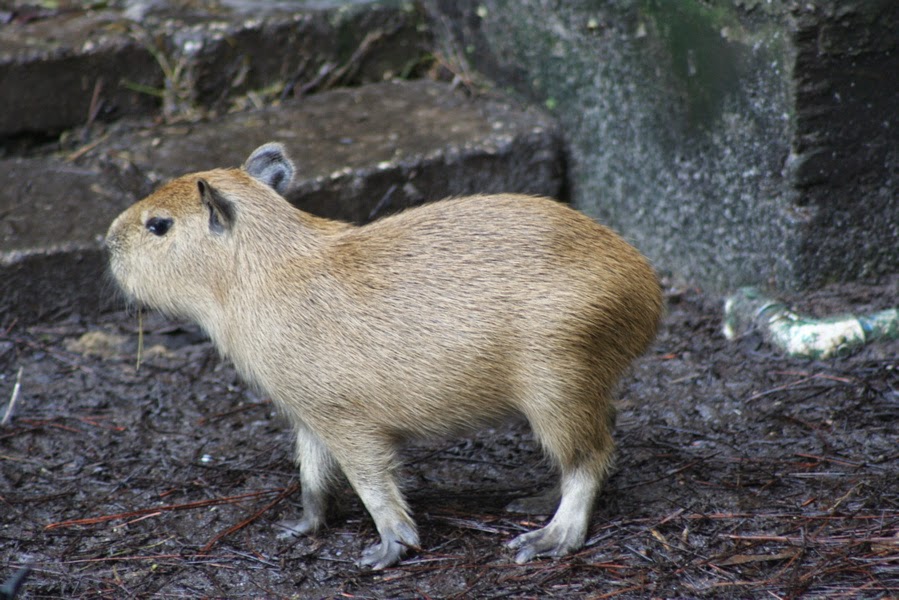 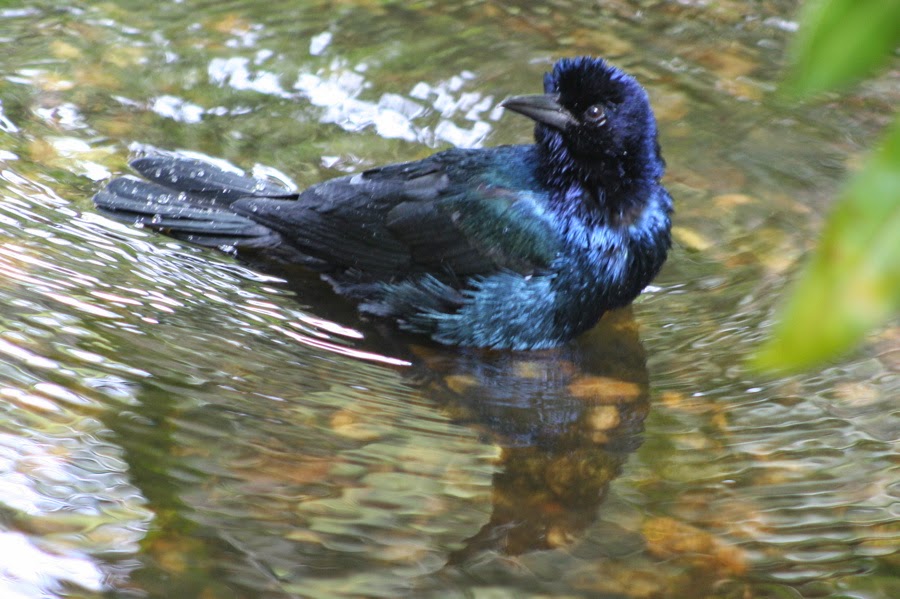 This guy cracked me up. He was a zoo-crasher, just having him self a grand old time in a puddle. It's a local wild Grackle, not part of an exhibit. 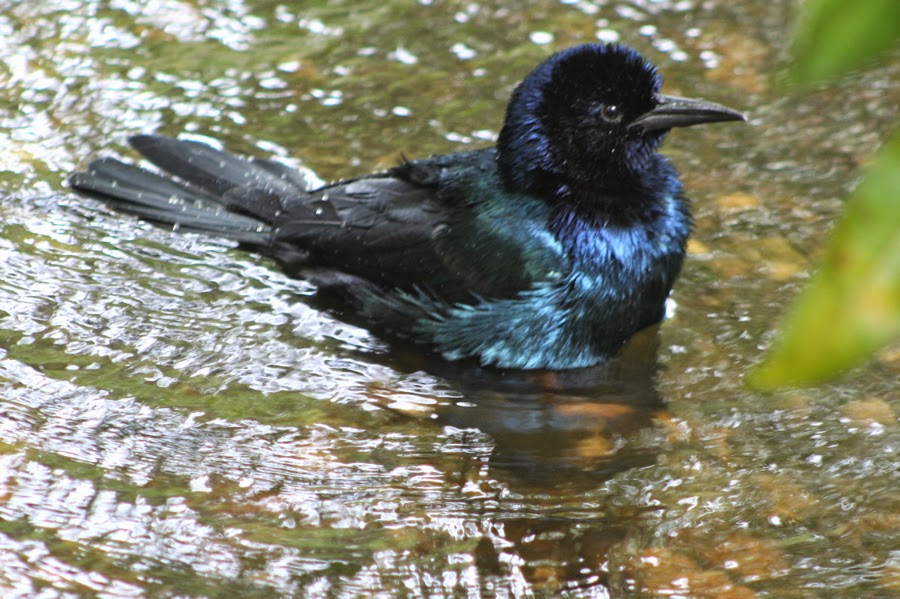 I love Grackles. They can look dull, but when the light hits them just right, they burst into color. 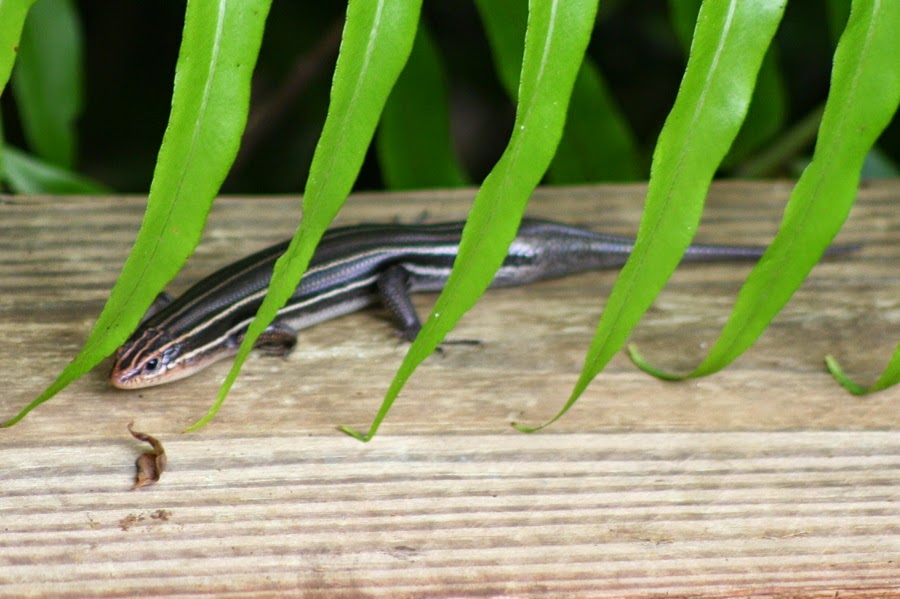 Another local wild critter, not part an exhibit, not captive. This is a 5-lined Skink. 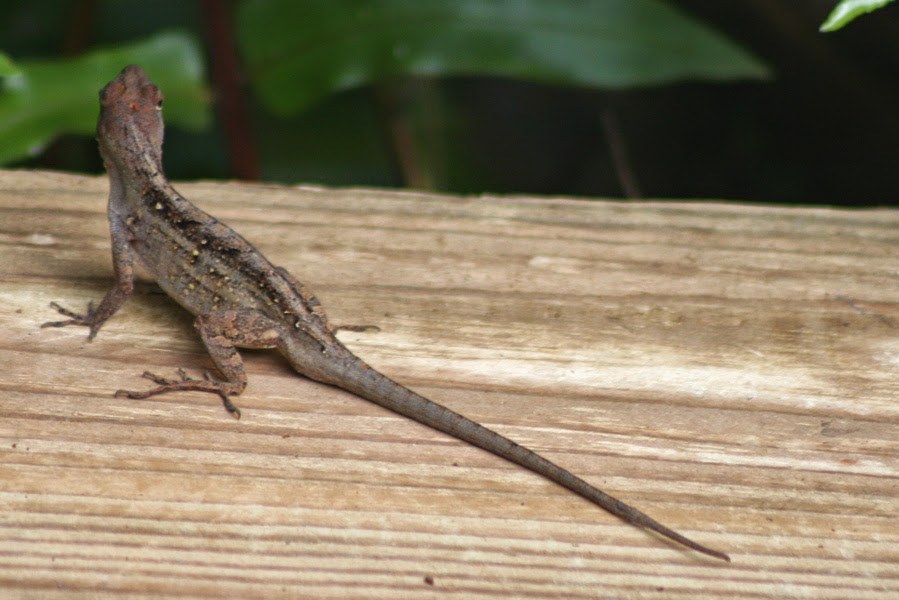 This wild non-native Cuban Anole was hanging out with the Skink. 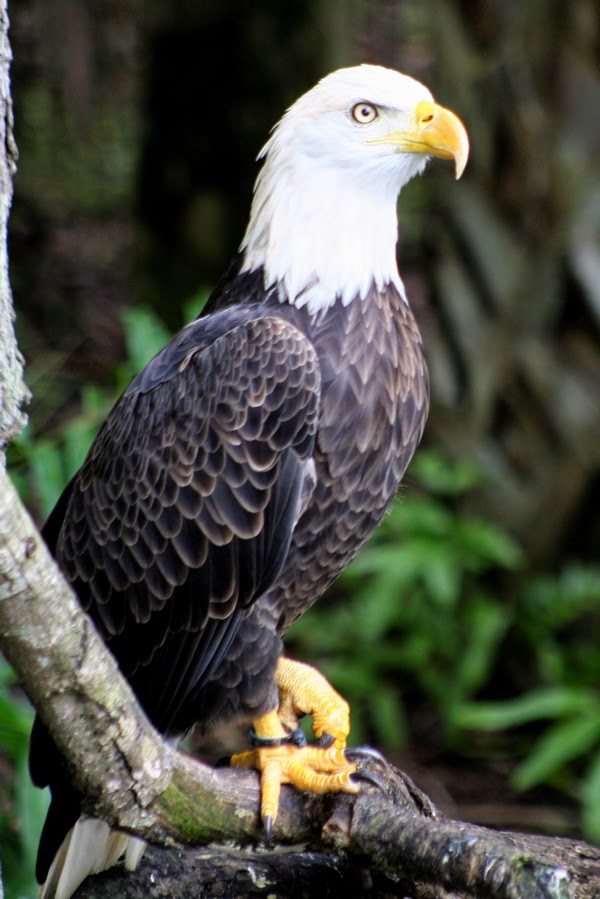 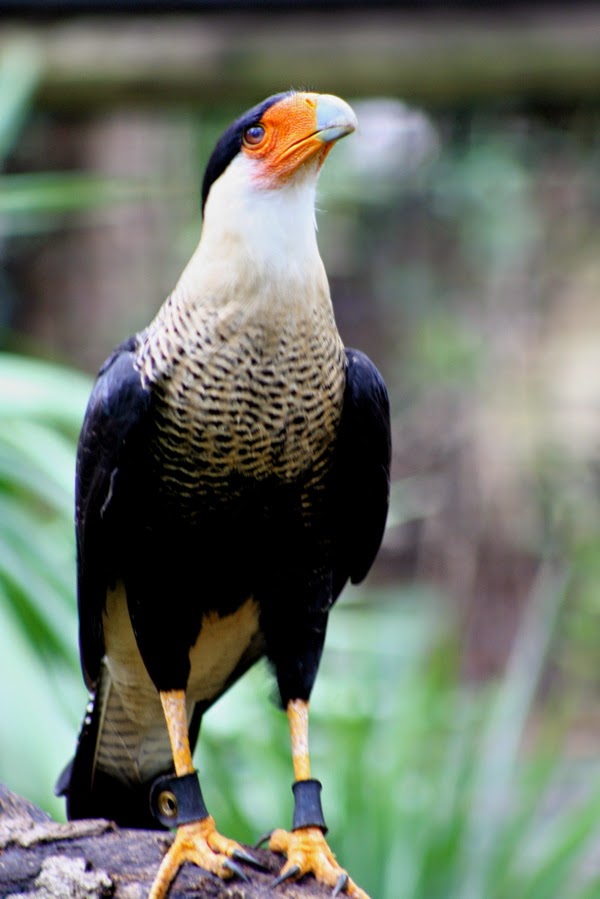 A Crested Cara Cara. He looks like he is wearing an ill-fitting toupee. 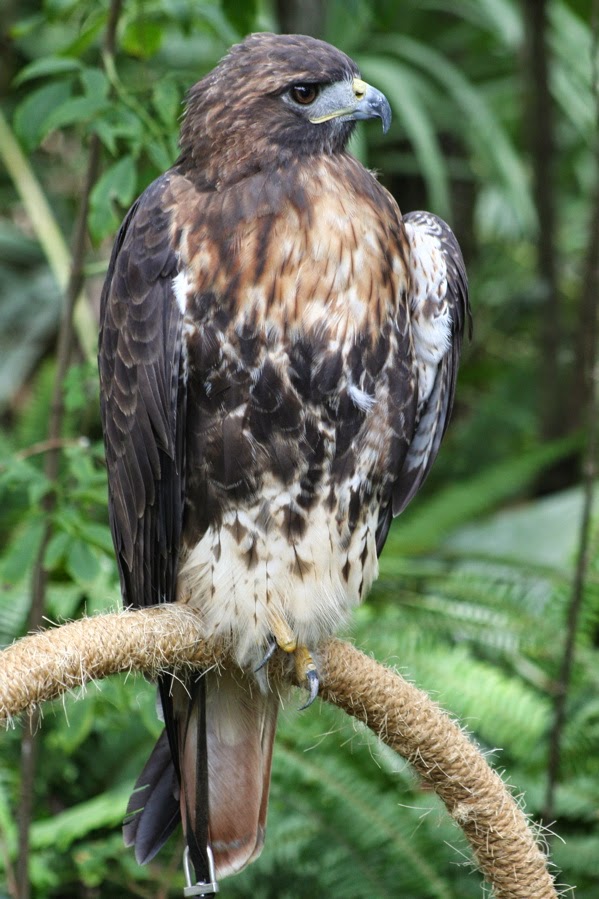 A Red-tailed Hawk. I felt bad for him, he was on a really short tether. Just not an animal that should be kept in a zoo, it seemed really cruel. I am guessing that the eagle and cara cara had their flight feathers clipped, but this guy still has his, which is why he was tethered but the other birds of prey were not. 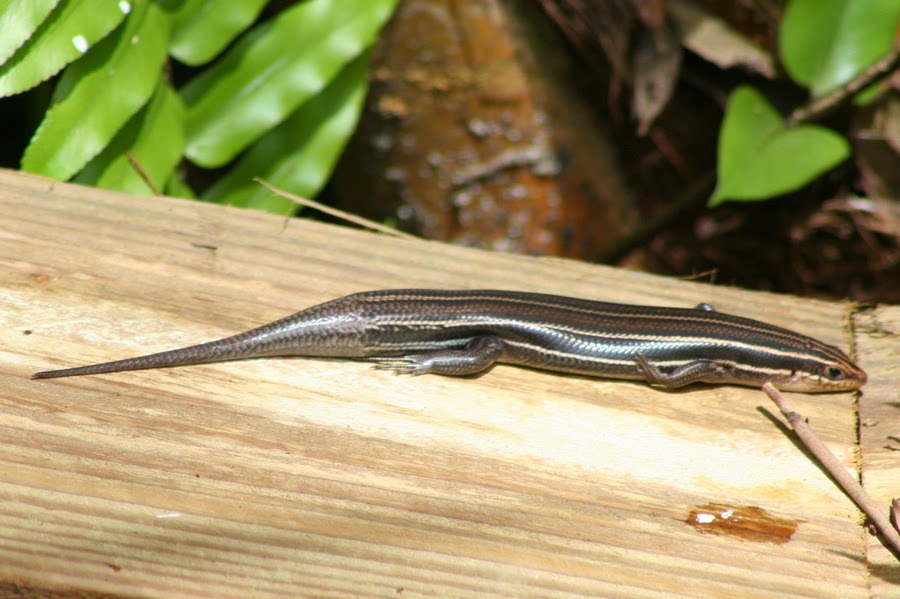 A better look at the skink. Make sure you click to enlarge this shot. You can clearly see that he lost his tail, and you can see where it has grown back, but with a totally different pattern. 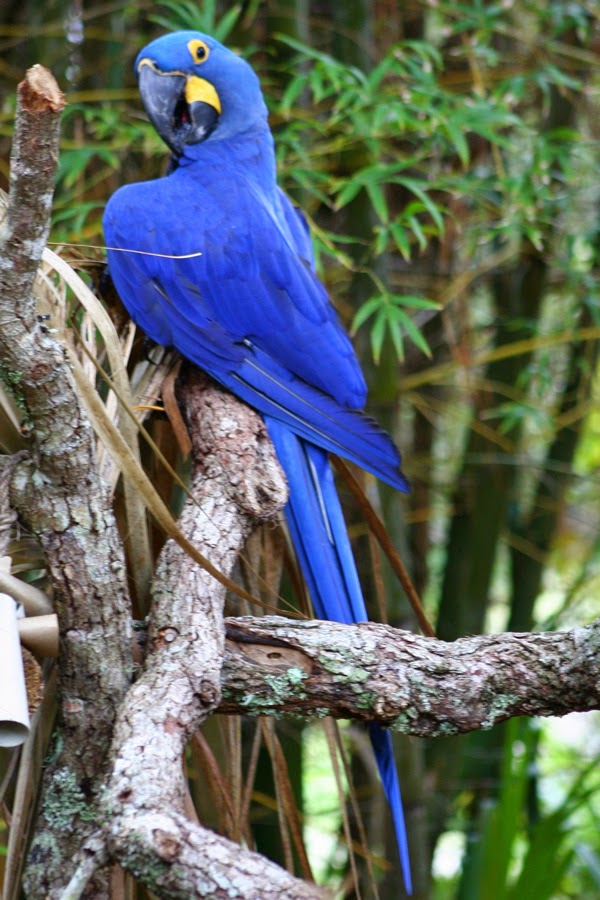 I think was a Blue Maccaw? 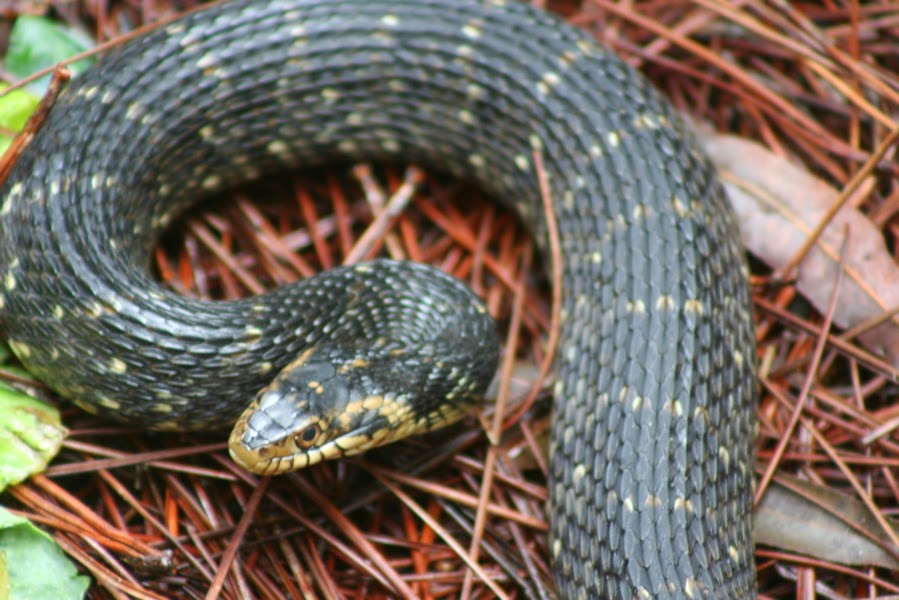 This is cool. Another local wild critter. A Banded Water Snake. He was visiting a turtle. A clue that he is not venomous is his eyes - they are round, not vertical slits. 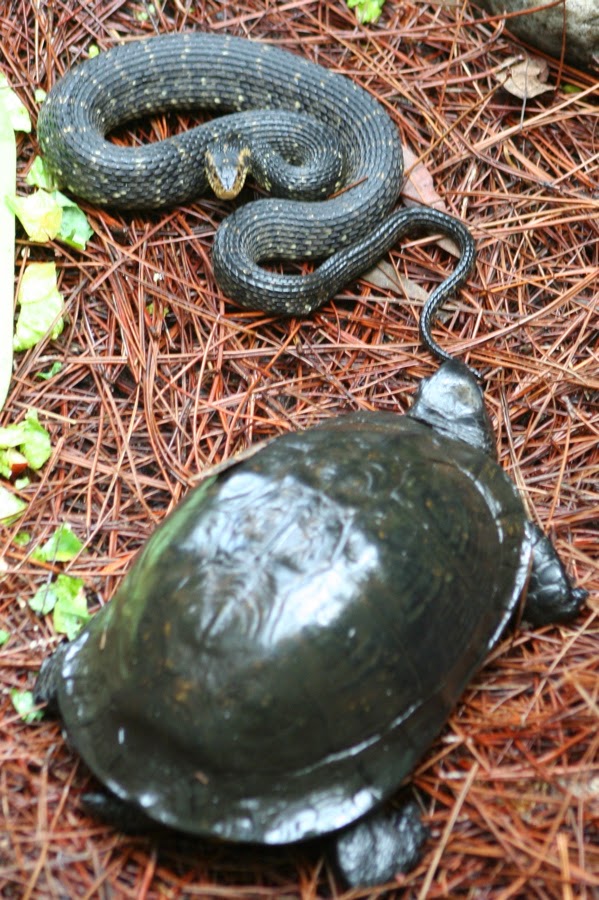 The snake the turtle having a chat. 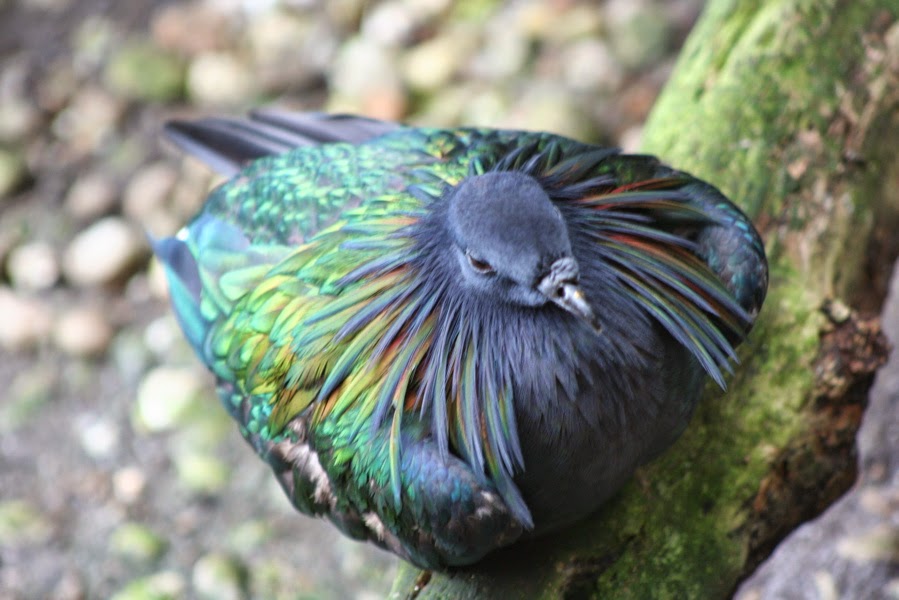 We (that is me and even David) have no idea what this one is. It was in the Australian exhibit.
Posted by deederange at 4:57 PM