How I Spent My Summer Vacation Part II

So, I was pretty happy with the living room and offices, but then I walked into the kitchen. Ugh. At first I thought it just needed the floors cleaned so I asked David to vacuum and figured I'd call it done. One thing led to another, $350+ at Lowes... 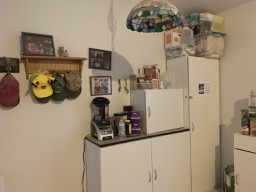 We had tons of stuff that just sat on counters and on top of cabinets. Just way too cluttered. Had to move stuff every time we wanted to cook. I added the counter here with the Ninja on it a while back, but again that too is cluttered now. 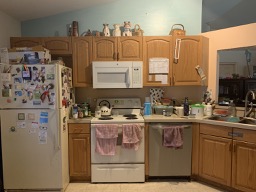 The two counters beside the stove were the only counters in the kitchen and they are tiny. And, (our bad) not particularly clean. I'm not surprised we have ants now and then, but what's surprising is that we've never had THEM. It was a tad gross. 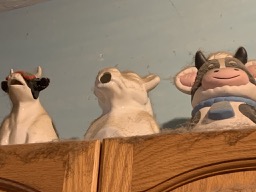 The dust had been accumulating for way too long. In my defense I'm too short to reach above the cupboards to dust. 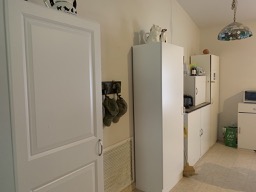 So, the first thing we needed was new cupboards. Out of the entire purging project, these 2 new cupboards were the only major purchase. The only other expenditures were some new drill bits, some screws, wood glue and 2 rolls of Contact paper. Everything else was reused or made from scratch. In fact, I made some additional shelves for inside these cupboards out of some left over wood from the previous bookcase and shelving in the garage. One other piece of trivia - I brought both of these cabinets home from Lowes (at the same time, one load) in my Honda Fit. I am the all time Queen of Trunk Tetris. I think the people who loaded them into my car thought I was nuts, but I've done this before and showed them the exact angle that they needed to put them in to make them fit. I love my car! 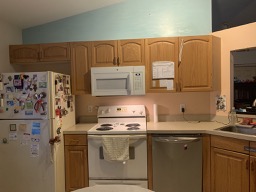 With the exception of a few decorative items (the three cows, a few cats, and a few ceramic pieces that Shirley and Lynn made) shown in the previous photo, nothing is on top of the cabinets or left on the counters. One thing I still have to do is wash the lower cabinets and maybe cull (or at least clean) my magnet/picture collection on the fridge. I have a photo of my friend Wayne and his wife and first baby hanging on the fridge, and I think the baby and her younger sibling are both in college now. 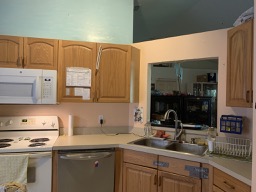 The dish drainer stays on the counter, that is a necessity for the stuff that can't go in the dishwasher, which is pretty much everything since the dishwasher has been broken for weeks and the repair guy won't call me back. But that is a story for another day. 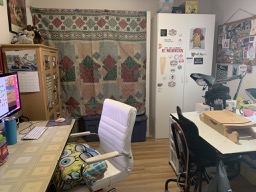 One more change to my office - I moved the pie safe into my office. It now houses my sewing supplies and projects. I like having them all together in one place, they were previously spread out. I moved the printer to David's office and will be donating/giving away the small chest that was there before. 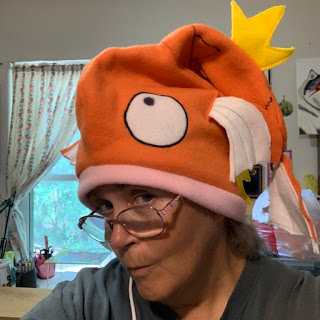 I had planned to take this last week before I go back to work as my actual vacation where I do nothing but goof off. That didn't happen. But at least I have a nice clean house (Both bathrooms need cleaning, but I already purged them when we had the floors done back in 2014. But they DO get cleaned fairly regularly and have been cleaned since 2014, for those who know me and were about to ask.)   The last frontier is the garage... maybe this winter when it's cooler out there.
One last thing - someone wanted me to model the Magicarp hat shown in the previous post. Here I am doing my best Blue Steel (Zoolander reference).

Posted by deederange at 3:27 PM