I've been forcing David and the cats to do an annual portrait since Nummy and Pita were babies. You can gradually see the cats become less tolerant of it through the years. Bart, Lisa and Maggie all went into hiding and totally refused to pose this year. They are still hiding as I type this in fact. Here is the whole collection of portraits for your enjoyment, or horror, depending on how you feel about making cats pose for pictures: 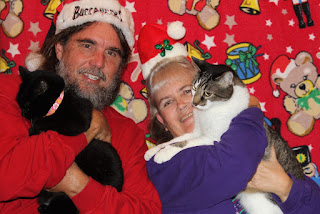 December 25, 2019 - Maggie, David, Me, and NummyMuffinCoocolButter. Barty and Lisa declined to pose this year. 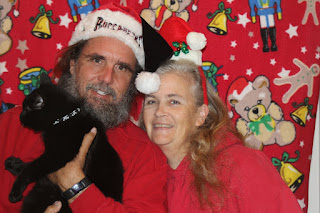 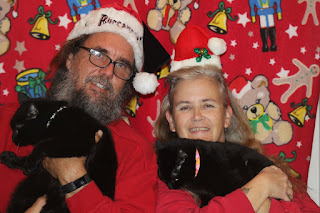 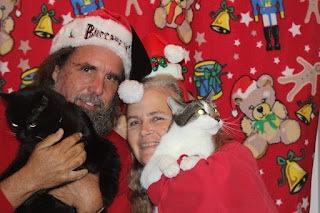 December 25, 2018 - Barty, David, Me, NummyMuffinCoocolButter. Sadly, we lost PITA to diabetes this year. On the one hand, we miss him, on the other hand there is less bloodshed in the house during picture taking time. 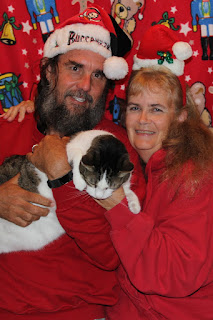 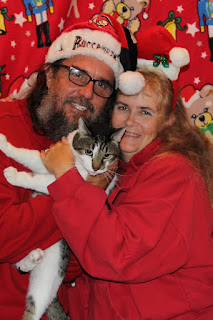 December 4, 2017 - David, NummyMuffinCoocolButter, and me. Nummy posed nice, but he sure didn't want to. 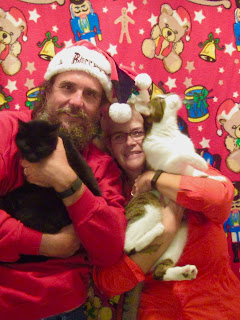 December, 2016 - Maggie, David, Me and NummyMuffinCoocolButter. We rejected this one from being on our card because David's hat was in front of my face. But I do like the way Nummy looks somewhat angelic here. But we all know better. 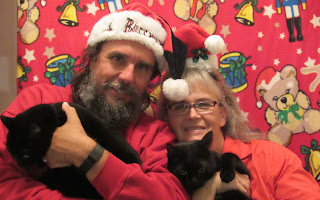 December, 2016 - Maggie, David, Bart and me. We rejected this one because David's hat was covering my face again and the back drop was crooked. But Maggie and Barty posed pretty well. 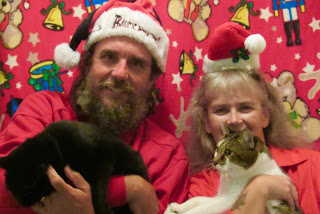 December, 2016 - Maggie, David, Me and NummyMuffinCoocolButter. Third time's a charm - this is the version we put on our holiday card. 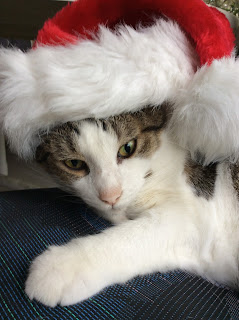 December, 2015 Pita. Little twit can't pose this nice when it's a group shot! 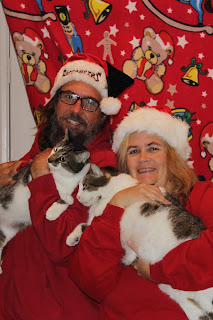 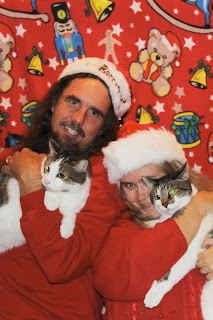 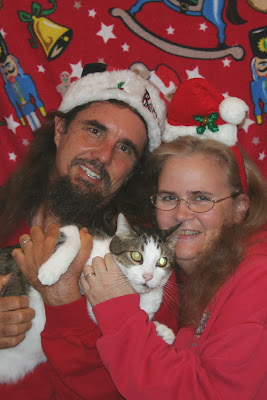 December, 2013 with Pita. No one else would pose this year, what a bunch of party pooper kitties we have. This year, Barty refused to pose at all, even after being offered salmon treats. Pita was surprisingly tolerant this year. 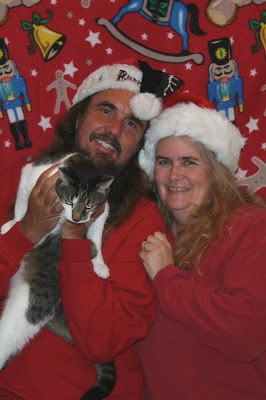 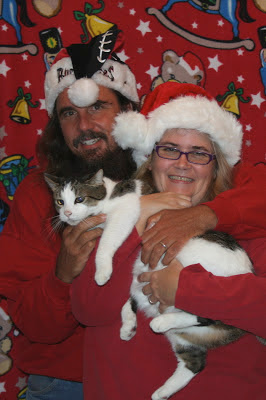 December, 2012 with Pita looking quite photogenic, but I forgot to take off my glasses 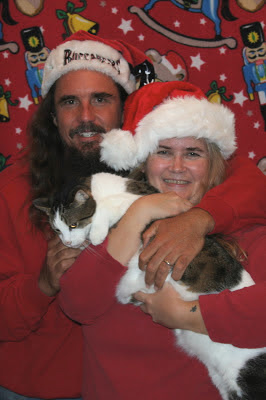 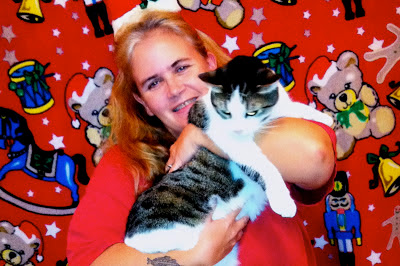 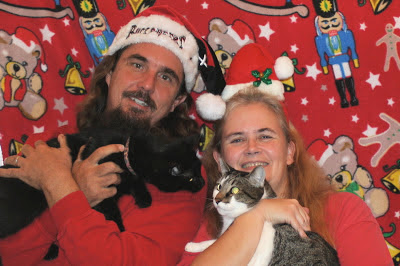 December, 2011 - with Barty and Nummy with an evil eye 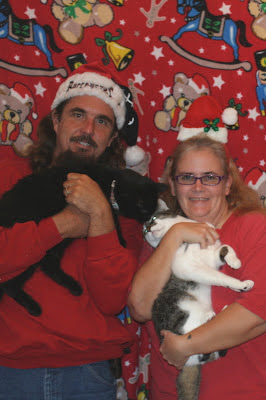 December, 2011 - With Nummy and Barty, but I forgot to take off my glasses. 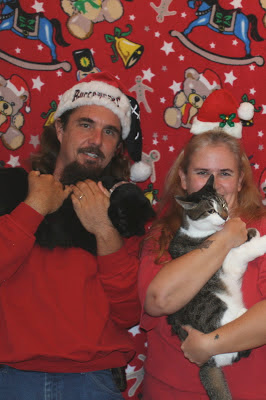 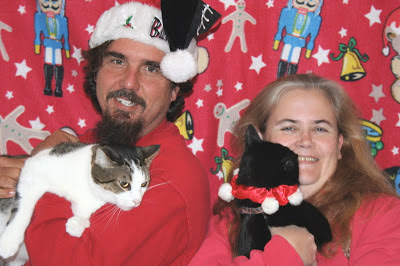 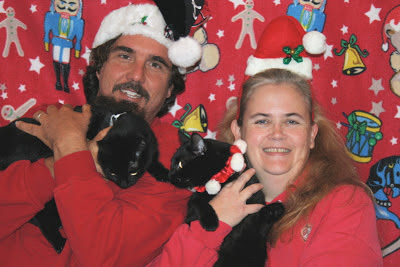 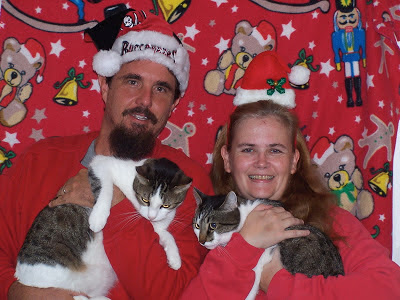 December, 2009 - with Pita looking psycho and Nummy. In fact, you can see that my forehead is bleeding. I think it was Pita who whacked me right before we took the picture. 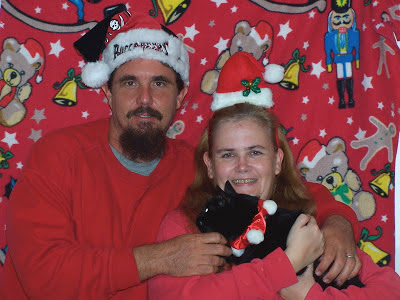 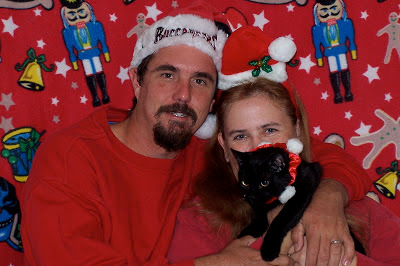 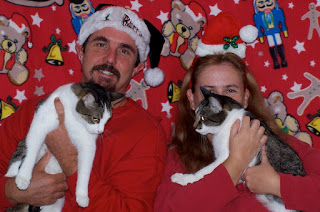 December, 2008 with Pita and Nummy 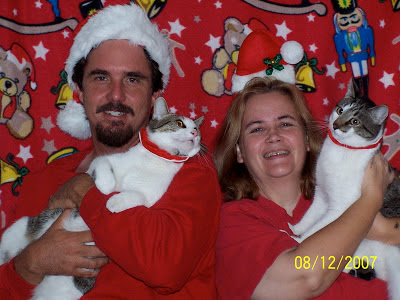 December, 2007 with Pita and Nummy 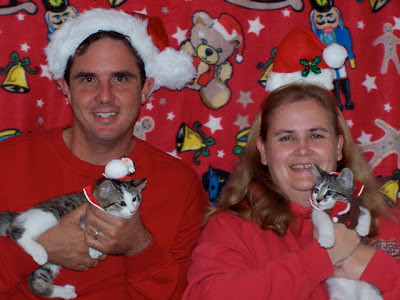